It seems that for many years now football pundits have been claiming that the F.A. Cup has lost its sparkle, and hasn't been living up to the tradition of the tournament. Various reasons are often cited for this - the abolition of replays, Manchester United refusing to take part in 2000, and the fact that nobody outside 'the big 4' has won it for a decade.

It will be slightly different this year, as successive 'giant killings' have left us with a final pitting two less fashionable clubs against each other. And there is also the odd scenario of virtually everyone in England, Southampton and Bournemouth fans aside, rooting for Portsmouth in order to stop a Welsh team claiming an English trophy. [1]

What isn't often mentioned in this context is the fact that one of the reasons that the F.A. Cup used to be such a special occasion in England was because it was one of very few, if not the only, domestic game shown completely live on television, a practice that started 70 years ago today.

The 1938 F.A. Cup Final between Preston North End and Huddersfield Town was the first to be transmitted live on BBC Television. It is unclear whether the press at the time were spluttering with outrage, and suggesting that the tournament had broken with tradition by allowing people who were not at Wembley to witness the game, thus devaluing the experience of 'being there'. 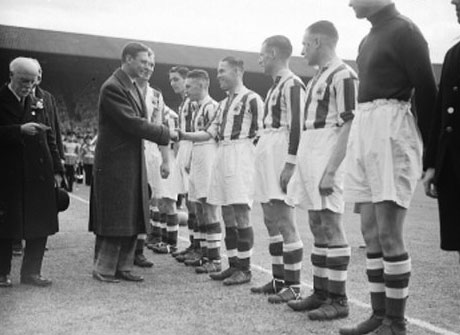 However, as we saw earlier in the year with the transmission of the first British television sci-fi - R.U.R. - not many people would have been affected. BBC television signals at that time were limited in range, and had a potential audience of only around 50,000 people, of which apparently 10,000 tuned in. By contrast, the 2005 F.A. Cup Final had a global television audience of 484 million. 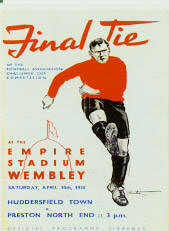 The game itself was unremarkable, with a 1-0 win for Preston North End courtesy of a penalty in the last minute of extra time. The television broadcast is chiefly remembered for perhaps the earliest football commentary gaffe. With seconds to go, commentator Thomas Woodrooffe declared that:

I've not been able to locate a clip of that on the web, but Woodrooffe was involved in an even more famous broadcasting 'incident', which you can listen to on the web. A year before the F.A. Cup Final, he was reporting for radio on the Spithead Review of the naval fleet. It seems that before the transmission, he enjoyed a little bit too much of the ship's hospitality.

Woodrooffe was on air for a few minutes, before an engineer cut him off, as he rattled off a very boozy and incoherent description of what was going on, peppered with repeated use of the phrase "the fleets lit up":

You can download a clip of the broadcast here.

[1] And probably some Manchester United people still blaming their F.A. Cup exit on one penalty decision rather than the 19 chances they contrived to miss during their match against Portsmouth in the quarter-finals. [Return to article]