The Hitch-Hikers Guide to the Doctor Whoniverse

Thirty years ago today, at 10:30pm on a Wednesday night, BBC Radio 4 broadcast a new landmark sci-fi comedy - the first part of Douglas Adam's "The Hitch-Hikers Guide To The Galaxy". 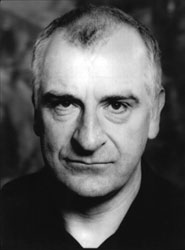 I was first introduced to the radio series by a school friend. Staying round his house in the early 80s, we'd stay up as late as we could get away with, listening to some C90 recordings he had of the episodes. He didn't have totally impeccable taste mind you. When we weren't listening to Hitch-Hikers, he had some tapes of the "funny" bits of Steve Wright In The Afternoon from Radio 1. For the life of me, I can't fathom how that took up any time at all!

When Douglas Adams was working on the radio productions of the Hitch-Hikers Guide To The Galaxy, he was also busy working on Doctor Who for television. In 1978 he wrote "The Pirate Planet", and he also contributed to 1979's classic "The City Of Death" which was partially filmed in Paris.

The shadow of Douglas Adams has loomed large over Doctor Who for years. The animated feature "The Infinite Quest" last year had a robot bird Caw as a central character that clearly owed a debt to the Polyphase Avatron in "The Pirate Planet".

Before that, one of the BBCi Doctor Who webcasts was a re-mount of the Douglas Adams story "Shada". 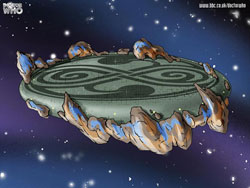 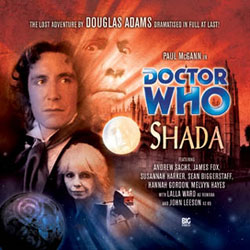 This was originally planned to be the last story of season 17, but industrial action forced the cancellation of the production. Footage was used as the fleeting appearance of Tom Baker in the 1983 "The Five Doctors" special, and during the 90s, Tom Baker provided linking narration on a VHS release of Shada which I've never been able to track down.

There has been plenty of debate amongst fans over the years as to whether the events depicted in Hitch-Hikers take place in the same universe as Doctor Who. Or, I guess, if you are more Hootoo than Whotoo, the other way round - does Doctor Who exist in the Hitch-Hiker's Galaxy?

The evidence on TV suggests that they co-exist. In 'The Pirate Planet', one of the named planets is also named as a planet in H2G2 as the source of a Pan Galactic Gargle Blaster ingredient. In 'Destiny Of The Daleks', when Douglas Adams was script editor on Doctor Who, the fourth Doctor is seen with a book written by Oolon Colluphid . More recently, in the 2005 Christmas Special, the newly regenerated 10th Doctor claims that saving the planet in his pyjamas is very Arthur Dent - "Now, there was a nice man".

Of course, the whole Hitch-Hikers Guide To The Galaxy universe itself underwent several incarnations. I know the books better than the radio series - having read and re-read the first three relentlessly in the early 80s. 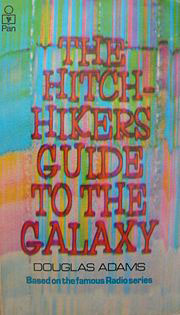 I also used to have a VHS tape with all of the BBC TV adaptation of the story on it. Well, all except the first couple of minutes of the first episode which my mum accidently started recording some of a Grand Prix on, prompting, no doubt, a chorus of "Owwwww, muuuuuum!!!" from me and my sister. I believe my sister still has, and watches, H2G2 on that VHS tape. 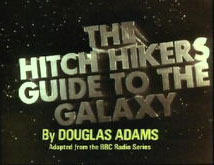 More recently the Hitch-Hikers film left me a bit cold, to be honest. We were behind some 13-14 year olds in the cinema, who were loving it, and thought Marvin was really cute and cool. I enjoyed Martin Freeman in the role of Arthur Dent, and Stephen Fry was an inspired choice for the voice of The Guide, but other bits of the film didn't really capture it for me. 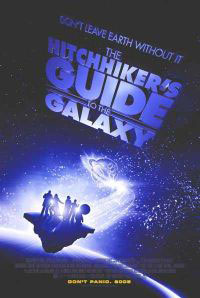 Then again, a lot of the die-hard radio production fans weren't that keen on the TV production either.

I can't complain too much - the Hitch-Hikers Guide To The Galaxy on TV gave me the inspiration and graphics for one of my favourite presentation slides ever.

Read other recent posts about: BBC, Doctor Who, Radio, Television