Last week I started a series of posts looking at the websites of Europe's leading 24/7 TV news channels in the English language. Having looked at Al Jazeera, the BBC and CNN, this week I wanted to start with Euronews. 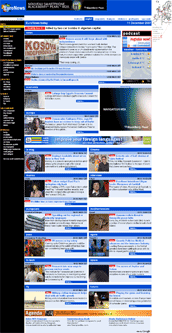 Euronews is a partially EU-funded station owned by a conglomerate of 19 broadcasters across Europe. The Euronews website comes in 7 languages - English, German, Spanish, French, Italian, Portuguese and Russian.

Euronews does publish RSS feeds, and the main feed is auto-discoverable in a browser from the homepage. However, there is no text link or promotion of RSS feeds, not even in the 'Services' section of the main navigation.

The RSS icon does appear on the homepage though, in a promotion for the Euronews 'No Comment' podcast. Since this is the section of their rolling news shows that features topical footage with no commentary, I can only assume it is a video podcast rather than a silent mp3 file for 2 minutes.

The page to subscribe to the podcast is, frankly, a bit of a mess. 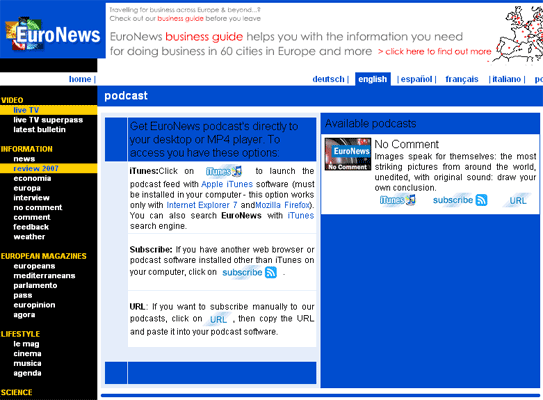 The Euronews site does not appear to feature any blogs or any social bookmarking tools.

User's are unable to add comments to individual stories on the Euronews site. A link in the left-hand navigation labelled 'comment' takes the user to a separate www.eucomment.com.

Well, it would do, but at the time of writing the site was closed for refurbishment - rather ironic for a channel who has a regular slot called 'No comment'! 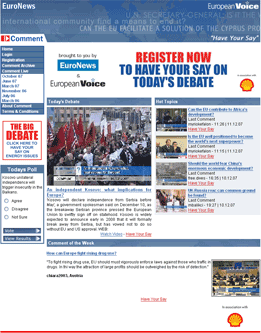 Co-branded between EuroNews and European Voice, once registered, users could take part in the message boards provided. Discussions were editorially selected by the site, and usually led with a question or debate inspired by a video clip, which could be watched online. 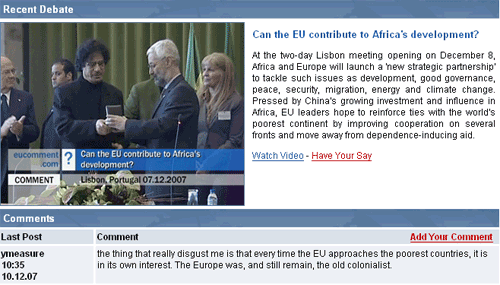 The main Euronews site does not feature a vote, but the 2007 EU Comment site did feature a poll of the day. The results could be displayed before the user voted.

Tomorrow I shall be reviewing at the English language website of the France 24 news channel, which has rather more of the kind of features I've been looking for.