I've been doing a series of articles looking at the websites of some of Europe's leading 24/7 English language TV news channels. This week I wanted to concentrate on some of the ways that the sites handle navigation issues. 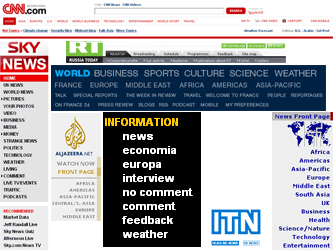 For a start we should note that all of the sites use nearly exactly the same type of global navigation structures. Links to stories are grouped into clusters by either the geographical locations of stories (e.g. UK, Middle East), or by the broad topic of a story (e.g. Entertainment, Sports).

None of the sites, though, seemed to use 'time' as a primary navigational device e.g. stories from today, stories from yesterday - an example of this type of navigation is The Independent's "Day in a page" feature.

I identified 10 distinct groupings of links, and mapped each link in the primary navigation of each site to one of these:

I wanted to examine several of these groupings in more detail

The majority of the sites, to a lesser or greater extent, used geographical region as a way of grouping stories. The BBC site even has a mini-map of the globe as part of their international edition left-hand navigation.

The exception was Russia Today which did not use this format, and Euronews, who only used 'Europa' as a way of gathering together EU related stories. ITN and Sky News rather crudely divided the news agenda into UK or World. Al Jazeera, the BBC, CNN and France 24 used a wider range of geographical locations, but not all regions are equal in coverage. Notably CNN covered the US, whereas the others cover 'the Americas', and Africa was under-represented. The BBC and Al Jazeera split the Asian continent into two sections.

I identified 22 topic labels across the 8 sites. Of these, 9 were unique to a specific site. The most popular topic was Business, which appeared in the primary navigation on all 8 sites (labeled as 'Economia' on Euronews and 'Money' on ITN).

The next most popular, appearing on 7 and 6 sites each respectively, were 'Weather' and 'Sport'. It should be noted here that the BBC lists these as 'Related sites' in their left-hand navigation, rather than in amongst the rest of the topics I identified.

4 sites listed 'Science' as a top-level topic, and 4 sites listed 'Technology'. Although I believe that on most sites these two labels essentially represented the same topic area, I have broken these into two categories since two sites (BBC and Euronews) list both Science and Technology in their main navigation.

Entertainment or Showbiz news features on 4 sites, with Euronews and France 24 having rather more high-brow 'Culture' sections. The fascination with promoting odd-ball stories as a destination in themselves seems a peculiarly British habit, with the BBC, ITN and Sky offering 'Also in the news', 'And finally...' and 'Strange news' respectively.

Another common way of grouping items on the news site was by content type. This could be further divided between content produced by the site, and user-generated content.

Of the content types, the most popular included a single repositry of in-depth or special reports, blogs, and travel/traffic news. Links to interviews, pictures and video also appeared in the primary navigation of some sites.

Several of the sites also had primary navigation links through to their user-generated content areas. The message board format was the most popular, which was included in the navigation of the Al Jazeera, BBC and Russia Today. Sky News had links to user-submitted photographs, and to the Sky News Panel. CNN have a link to their iReport initiative in their header navigation.

Traditionally on the web a lot of sites have buried their corporate information in 8pt type at the foot of a page. Some of the news sites I looked at had much more prominent links though. Sky, Russia Today and Al Jazeera have their 'About us' link in their main navigation. Sky, Russia Today and, this time, Euronews, also have a 'Contact us' link in their primary navigation.

Several of the sites used their left-hand or top navigation sections to promote ways of obtaining their content beyond web pages. Here podcasts, mobile editions and RSS feeds were the most popular formats listed within the main navigation areas.

It was noticeable that amongst the three sites that seem to have most embraced download tools and desktop alerts - CNN, Sky and the BBC - Sky were very aggresive in promoting these tools in their left-hand navigation. CNN and the BBC tended to link to these features in promotional slots, rather than as part of their permanent navigation. 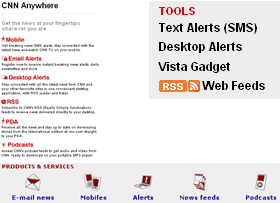 Tomorrow, in the next part of this series of blog posts, I'll be looking specificially at how the 8 sites I've been looking at encourage users to move between stories with lateral and related navigation features.