There can't be many occasions during married life where you get to lean in towards your wife in a dark alley in London, and utter the immortal phrase "Scratching Fanny of Cock Lane". But that's exactly what happened to me last week, when we were on a ghost walk near Farringdon.

Yesterday I wrote about a ghost walk my wife and I did in London from St Pauls to the Barbican. The walk featured in Richard Jones' excellent "Walking Haunted London" book. As soon as we finished it, we started on the next one, since Haunted Clerkenwell, as described in the book, starts from where we were, at the Barbican station.

The first stop was a pub in the side-streets by the station, called The Sutton Arms. The Sutton Arms turned out to be, I felt, one of the creepiest places we have visited on any of our ghost walks. It seemed nice enough, and had a solid selection of quality guest foreign beers in bottles and Czech lager on tab, but something about the place really gave me the freaks. Going up the narrow stairways to the toilets wasn't fun at all, especially as the staircase carried up beyond them into a darkened floor above, and I was half expecting the resident spirit Charlie to pop out at any moment.

Our next stop was one of London's old plague pits, dating from the epidemic of the 1348. Reputed to hold over 50,000 corpses, it is said that if you press your ear to the ground at midnight you can hear the screams of the poor wretches who were mistakenly buried alive in amongst the dead.

It was a damp night, and the green is fenced in by railings, so we didn't get to try and a have a listen - although we did get a massive fright when a giant fat cat suddenly rustled through the bushes and strolled out of the green just as I was getting to the climax of reading the story.

To the side of the green is the Charterhouse. This Monastery was violently dissolved in the Reformation, with the Prior's severed arm nailed to the gates to make Henry VIII's point about whether he, or the Pope, was the representative of god on Earth in England's green and pleasant land. 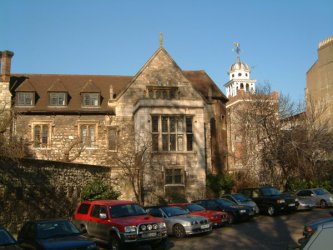 It is meant to have two ghosts. A melancholic monk from the days when the monastery refused to accept Henry's dictates, and the headless ghost of the Duke of Norfolk who later occupied it, executed for his intrigues with Mary, Queen of Scots.

Next we were off to what is left of St. John's Clerkenwell. The graveyard here was the scene of a vigil to see if a corpse would knock on the lid of its coffin in order to signify that it had been murdered.

This was the climax of a ghost story that had gripped London, involving a love triangle and an unpaid debt, and a mysterious scratching noise. The vigil was attended by Dr Samuel Johnson, and no noise was heard, so the haunting was declared fakery.

The name of the corpse and the ghost making the mysterious noise?

The location of the haunting?

My wife's reaction when I read this bit of the book was to snatch it out of my hand and declare that I was just making it up. I can't say I really blame her.

We then made our way through some back streets that we used to frequent to visit a couple of great pubs when she worked near the area - The Three Kings and The Dovetail - to reach "The House Of Detention". 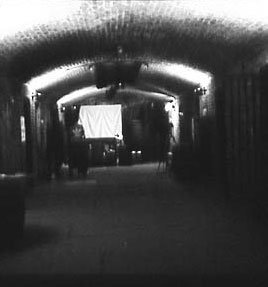 Although you can't access it now, this prison had an underground tunnel system of cells, which were once open as a museum. Visitors used to report a host of ghostly sightings, including the appearance of old women and sound of distressed children.

Our last stop was Bleeding Heart Yard. This is apparently named after a rather fanciful story involving the devil turning up at a ball at Hatton House, which used to stand nearby. Apparently the lady of the house absconded with the devil, and all anyone saw of her again was a bleeding human heart laying in the road outside.

By now we had reached Farringdon station, which itself has a screeching ghost, and the last stop of not only our walk around Haunted Clerkenwell, but the last of our four ghost walks in London during our recent stay in the UK.