Sacred at the British Library

In between zipping around various BBC buildings last week for a series of meetings, I took a half-hour out to visit Sacred at the British Library - their exhibition of religious texts from the history of Judaism, Christianity and Islam.

The material on display is undoubtedly spectacular from a historical point of view - with surviving fragments of Dead Sea Scrolls, the earliest known Christian Gospels, and rare parchments from Islamic Spain. There are also bibles in Syriac, Slavonic, and the first English Bible, with Henry VIII depicted delivering the sacred word to his people as if it was a philosophical move, rather than a pragmatic political one. Also on display was The Lindisfarne Gospel, and some extravagantly decorated royal Qur'ans.

I was a little bit disappointed though. Although the exhibition is free, you have to pick up a timed ticket. Despite it being mid-morning on a weekday the exhibition was absolutely packed, and it was quite hard to get to see some of the most precious items.

The exhibition also seemed to attract a disproportionate amount of grumpy old people. A school party appeared in the exhibition to virtually a chorus of tuts and groans. It always strikes me as funny about the way us British treat our children - always exhorting them to do better at school, learn more, and have more of a moral compass, yet disapproving in droves when they turn up in public places to actually do some of that learning.

I was also a bit puzzled by the display outside the British Library. 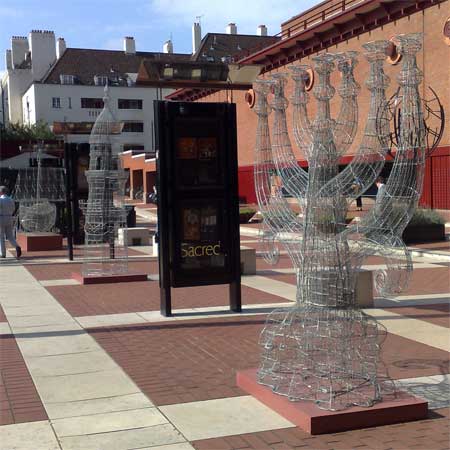 There are wire sculptures representing each faith. A menorah for Judaism, fair enough. A mosque minaret for Islam - well, given the faith's abhorrence of physical depictions of people, I can see that as well.

A rather odd looking boat with a cross and a fishing net over the side, which I assumed was meant to represent Jesus making the Disciples into "fishers of men", but I couldn't help call to mind the Crusading aspect of Christianity, and events like the naval battle of Lepanto. But maybe that's just me.

One thing was for sure though. The items on display indicated thousands of years of painstaking art done by hand in the name of [insert appropriate deity here]. The exhibition was designed to show the similarities between the three 'Abrahamic faiths'. I just left thinking that at the very least, two of them must have been wasting their time.

As Andy Partridge once put it:

"Dear God, I don't know if you've noticed but,
Your name is on a lot of quotes in this book.
Us crazy humans wrote it,
You should take a look" 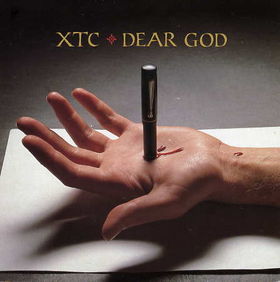