Last week I started a survey looking at the extent to which British newspaper websites have incorporated the technologies of Web 2.0 into their sites. I've been looking for things like RSS feeds, buttons to add stories to social bookmarking sites, blogging, and the incorporation of user comments into the site. So far I have looked at the Daily Express, The Times, The Mirror and The Telegraph.

This week I wanted to start with an analysis of The Daily Mail's site.

For a long time this web property was quite under-invested in, but the most recent redesign of the site expanded not only the content available from The Mail online, but also the use of interactivity around that content.

The Daily Mail has an RSS feed of the front-page, which is auto-discoverable. RSS is also featured in the left-hand navigation of the page.

The site provides an overall help page for their RSS feeds, and a complete list of the content available. The help page explains about downloading news reader software, and that 'newer' browsers incorporate RSS, but makes a bit of a clumsy attempt at explaining online RSS readers.

There are also some websites that let you customise a list of RSS feeds too.

At the time of review, the site offered 33 feeds - including some quite granular feeds like "Schools Football", as well as some more general feeds like "Mail On Sunday" and "Other Sports".

The list doesn't seem to be classified in any kind of logical order, with the Femail, blog and showbiz feeds being sandwiched by two chunks of sports coverage. The feed for the Cricket World Cup was simply added to the bottom of the list, and presumably at the end of the tournament it will suffer the same fate as the "Big Brother" feed above it - still listed, but not updated since February 2nd.

The Daily Mail RSS feeds are distributed using the FeedBurner service, which means that they carry a whole host of buttons to allow users to subscribe to the feeds.

The Daily Mail makes a great deal of use of user comments. There are comments attached to every story, and the home and index pages for each topic include how many comments have been left by users as part of the metadata for each item.

At the foot of each story the three most recent comments appear, and users can click a link to reload the page to show all of the comments.

Comments on the site are pre-moderated, and limited to 1,000 characters. Users can opt to have the Daily Mail email them a link through to their comments if they are published - although as I have personally experienced, they don't always get published with their full meaning intact.

When leaving a comment, you need to pass a capcha test, and after your comment is submitted the Mail promotes links to a bunch of recent stories which have recently attracted a high number of user comments.

The pre-moderation isn't perfect though, as can be seen on this article about newly-unemployed professional Kate Middleton look-a-likes, where one of the featured comments is little more than an advertisement for a look-a-like agency.

The Daily Mail has a slightly curious approach to social bookmarking links.

Some stories carry a selection of sharing links at the foot of them, with the Mail opting to link to Digg, del.icio.us, Reddit, Newsvine and NowPublic.

However, this only seems to happen on stories in certain categories - for example the entertainment and sports sections. News stories do not carry the links.

It isn't clear from the outside what has driven this decision.

Possibilities include that it is felt that these types of stories are more 'bookmarkable', that the Mail has just been testing the water with these services in less important areas of the site, or that the Daily Mail doesn't think these kinds of links are appropriate for serious news content[1].

The Daily Mail's blogs do carry the social bookmarking links on each post though, and opt for the same five choices of link.

At the time of review the Daily Mail was offering seven blogs, mostly personality led from their roster of columnists 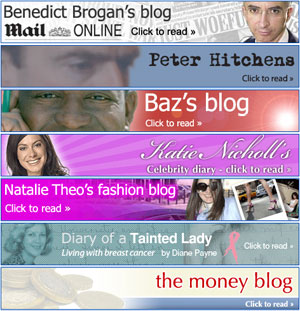 The blogs have their own sub-domain names, and judging from the favicon use the Typepad platform. As with their use of FeedBurner to distribute their RSS feeds, it seems the Mail has sensibly opted to use established third-party services rather than build their own blog management and distribution platforms from scratch

The blogs have their own RSS feeds, although these are not listed on the Daily Mail's main RSS feed list.

The Daily Mail's blogs typify what I consider to be one of the failings of the majority of blogs and blog-style content currently offered by British newspapers. Without wanting to pick on one particular author, Daine Payne's "Diary of a Tainted Lady" demonstrates this.

The topic of the blog, a first-hand account of suffering from and eduring the treatment for breast cancer, is a highly personal and emotive subject. Yet, framed within the parent newspapers navigation scheme and look and feel, it doesn't come across as a personal blog.

Newspapers seem to have grasped that the blog format can be a compelling one with the right content, and that good blogs can act as incoming link bait, but on the whole the British press seems unable to have grasped how linking out is just as an important part of blog culture.

I doubt that out in the wilds of the internet, a personal blog about a cancer victim's story would choose as their entire blogroll five blogs carrying wildly different topics, all from the blog family of one newspaper. "Diary of a Tainted Lady" is forced to do so though.

Likewise, Baz's Blog must be one of a minority of showbiz gossip blogs that never links out to any other sources of celeb news, and to hardly feature any photos of the celebrities Baz is gossiping about.

On the whole I am very impressed with the Daily Mail's new media activities. They seem to have really captured the passion of their online readership with their comments policy, and it is rare to see a story on the site that hasn't attracted a lot of reader comment. The user comments add genuine value to each story, and make the site a more entertaining place to visit. They also benefit from not being hived off into a different comment section, but being integrated into the flow of the stories on the site.

Their RSS offering covers a broad range of content, even if it doesn't include full feeds, and they have dabbled their toe in the social bookmarking water.

Their blogs are the only area where I think they are not competeing so well. With the exception of Diane Payne's breast cancer blog, they haven't really captured the personal tone that compelling blogging seems to require. The blogs also feel quite insular and isolated from the rest of the Mail's site, and the rest of the internet.

In the next part of this series I shall be looking at a newspaper that in contrast to some of the bold decisions it has made in print, has been attracting a lot of criticism for their cautious "wait and see" attitude to developing their web presence - The Independent.

[1] Alternatively, I guess it might just be that Captain Cock-Up paid a visit, and that the links are missing because of an error in the 'News' template. [Return to article]