If you follow European football at all, you can't have failed to miss the fact that Tuesday night's match between Valencia and Inter Milan ended up with a shocking brawl that tarnished the image of the beautiful game. As a result, it also provided the perfect opportunity to see how the British press incorporate video into their websites.

On Wednesday morning I had a trawl through the major newspaper sites coming out of the UK to see what kind of coverage there was.

The Independent only had a couple of paragraphs about the match, and The Daily Express - "The World's Greatest Newspaper" you'll recall - had no coverage at all as far as I could see. I couldn't search for it since The Express does not offer a site search of their archived content.

They do, though, still have a promo for their up-to-date coverage of England's 2006 World Cup campaign on their football homepage, so, judging by that time-scale, perhaps they will feature the Valencia - Inter Milan brawl some time in December this year.

The Times and The Mirror both covered the story online, but neither paper made much use of multimedia for what was such a visually driven news story. The Mirror included one still photograph of the brawl, The Times didn't. 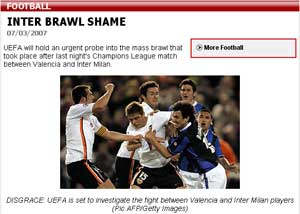 Although not a newspaper, the BBC News site generally gets lumped in with the mainstream online media in the UK, and it featured a still photo gallery of events at the Mestalla, but no video clips.

It was, therefore, The Telegraph, The Guardian, the Daily Mail and The Sun who led the way with the multimedia content. All of them used YouTube in different ways in order to show their online readers what had happened.

The Guardian linked directly to a YouTube page from their football homepage with the link text: "See the full fisticuffs here". There was also a link to a YouTube page hosting a clip of the fighting within the body of their article on the topic.

Linking directly through to YouTube isn't without editorial issues though. The Guardian linked through to a page that included comments like:

f**k valencia u f**king p**sies inter would f**k u up if u didnt run away f**k everyone who likes valencia forza nerrazuri u sons of b!tches f**kin p**sies

The Telegraph also linked directly through to YouTube, but to a different copy of the clip - which was rated 18 - but still included such delightful sentiments in the comments as:

f**kin navarro, he should be raped, runnin like a little coward p**sy

Both The Sun and the Daily Mail instead opted to embed the YouTube videos directly into their story pages. The Daily Mail had a link right at the top of their story to get the user to go through to where they had anchored the embedded video.

The Sun meanwhile had "Fight Clubs - Watch Champions League brawl" as one of the featured sport items on their homepage. 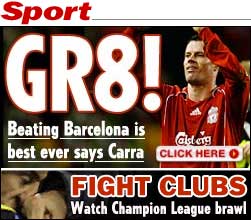 Not only does this show a real variation in the approach taken online by the different newspapers, it also shows a divergence in their legal approach to the situation.

For me, The Sun and The Daily Mail have clearly done the right thing for themselves and their audience - the story involves dramatic video footage, and they have added value to their site by embedding the video directly, whilst keeping their users on their domains.

However, they must know that they do not have the rights to show Champions League videos on their site.

The clips on YouTube are a copyright infringement on UEFA's TV marketing deals, and stolen from the channels that first transmitted them. The Daily Mail and The Sun have obviously concluded that they are not liable for that infringement, even though the video is embedded in their pages.

However much value it has added for their audiences, I'm not sure that UEFA would agree.