Staying on a travel theme this week, since I am over in the UK for a few days, I noted James Cridland's post about the problems he had trying to make travel arrangements with a card that was due to expire in a little while. I had a similar problem last week when trying to travel.

Having got to the UK, the first leg of my mad dash around the country involved flying from London Heathrow to Edinburgh with British Airways.

For domestic flights BA are understandably keen reduce costs and to get people to check-in either before they reach the airport over the internet, or by using electronic kiosks at the airport. We were directed to one of these kiosks by staff before we even had the chance to approach the old-fashioned manned desks. 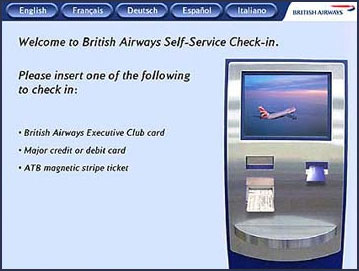 The system relies on identifying you, booking your seats, and then issuing you with a boarding pass before you drop your luggage off with security. I found it pretty easy to use, but there were a couple of drawbacks.

Firstly, for some reason, it split my wife and I up into different seats on opposite sides of the craft, with people in between us. Initially we thought we must be nearly the last to check in, but I had second thoughts, and after a poke around the interface I was able to scroll the plan of the planes interior up and down and find two seats together that were not booked. It seemed to me that the seats were being issued on the basis of occupying the least number of rows of seats (thus making cabin service quicker to deliver) rather than for the convenience of the customers. I couldn't help but think that it was a lot easier for an information panel to just inform us we couldn't sit together via the screen than expecting a memebr of staff to try and explain that although there were empty seats next to each other on the plane, we were going to have to sit apart. 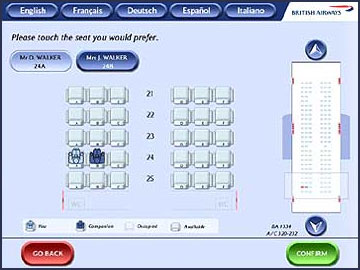 The second, and much bigger, problem, came when I tried to prove my identity - I had to insert the credit or debit card with which I had made the purchase. Which would be fine, unless of course, like me, you had booked the flight in December 2006 with a card that expired at the end of 12/06, but were trying to fly in January 2007. I didn't have the expired card on me, and the machine did not accept my identity from the replacement card, even though, of course, it is for the same person and bank account.

Which meant after five minutes fiddling around with the touch-screen mechanism and changing our seats, we had to go and see the human we had been trying to see in the first place. Incidentally, the screen-grabs are from BA's online tutorial about how to use the system, which is a great idea, but sadly only seems to work properly in Internet Explorer.

I understand from reading the British press whilst in Austria that criticising British Airways appears to be once again a national sport, whether it is their policy on jewellery, their staff striking, or them simply being affected by the same weather that hit everybody in the UK last week. Due to the winds that were already building up across Europe we had a pretty rough landing, just as I did when I arrived in London from Salzburg, but I must say that apart from the electronic check-in we found the flight to be fine, the service good, and on a short flight we still got a bite to eat and complimentary newspapers. I'd be happy to use them again

Well, at least until my debit card is near expiry again.