Don't talk to me anymore!

It hasn't been the easiest of months for the BBC's online communities. Late last month it was announced that a swathe of the message boards on the drama and entertainment areas of the site were to be closed. It prompted an outcry amongst the users which even graced the pages of The Times:

They are members of one of the country's most clandestine communities. Predominantly female and in many cases highly educated, they have gathered - unbeknown even to their husbands - under assumed names to meet "like-minded people" for more than two years.

But this morning this mysterious group will wake up to find its cosy world in tatters. Yesterday the BBC axed the majority of its online message boards.

The thousands of people who spent guilty lunch hours or spare evenings logging on to the BBC website to deconstruct North & South or ruminate over Dirty Den's unfathomable sexual charisma, say they have been maliciously turfed out of cyberspace.

Having succumbed to her favourite show's talent for the melodramatic, one EastEnders superfan likened the cull to Hitler's 1934 purge: "This is the BBC's night of the long knives."

In response to an external review last year, which was considered by the BBC Governors, the BBC has been reviewing its message board services and will be introducing some new and simpler methods of providing user interaction and feedback. These are designed to appeal to more users without compromising on the quality people expect from the BBC.

Many messageboards will be continuing, but in some areas, such as drama and entertainment, we have found that messageboards do not serve the majority of our users particularly well. In these areas specifically, we are developing simpler and more imaginative ways to interact. These include rating and voting features and more content generated by our users themselves. We realise that for many people using some of these boards regularly this may be disappointing, but we are confident that the new services will let more views both be heard by us and shared with one another.

Some users were on the receiving end of a second shock though, as no sooner had the Cult message boards been closed the BBC announced that it was closing the Connector service. As a pilot service it had not been rolled out to many parts of the website, but Connector was an instant messenger application that placed people viewing the same page into a chatroom together. The BBC used it on the Radio One and Cult sites, as well as trying it out around specific event content like Fat Nation or the Olympics.

I've always had a soft spot for Connector. I thought it was a fascinating application, and certainly in the early days of the pilot really enjoyed hanging out and watching how conversations developed between strangers who only had the internet page they were looking at in common. I also know it was used by some staff in the BBC to have meeting via instant messanger when one of the party had access to the web but not a way of getting regular IM through the BBC's firewall!

Still, in announcing that the service was to be turned off I was entertained to see the Cult team deploy their impeccable sense of sardonic humour. 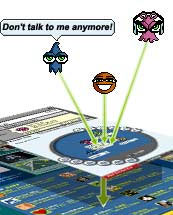 Read other recent posts about: BBC, The Times