Last night we made the first "structural" change to the BBC homepage since May 2004, to incorporate a panel under the main promo that provides some semi-permanent links to information about the disaster that has befallen Asia. 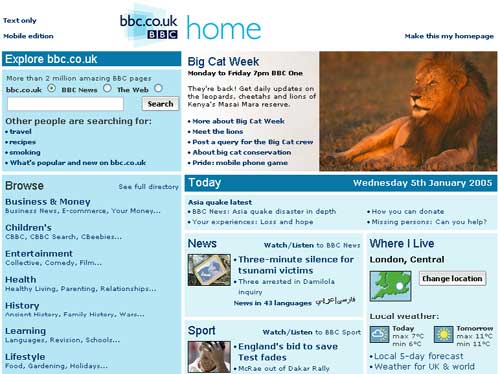 It came about in a strange way. I was one of the few people in the office between Christmas and New Year, and part of what I was doing in that quiet period was working on was a series of mock-ups of "What if..." we could do this on the homepage. One of which was "What if..." we could drop extra chunks into the homepage layout to support a semi-permanent presence for things that weren't "Breaking News" anymore, but that required a longer appearance than the tightly scheduled main promotional space allowed. So as soon as the subject of changing the homepage started being discussed there was already a mock-up for me to wave at people to say "we could do this".

But it only happened today because of the generosity of one our client-side coders, who dropped what they were doing and instead munged the homepage code into the shape we wanted. Which yet again illustrated for me one of the best things about working at the BBC, the way that our undersung technical staff always seem willing to help out whenever they can, even at short notice, and when presented with a very vague request.