I left town late this evening and only got to Walthamstow just in time for the kick-off of the Czech Republic-Greece Euro2004 Semi-Final. I rushed to my local, the College Arms, to be astonished to find it was standing room only. For some time they appeared to be operating a policy of only employing beautiful Eastern European women as barmaids - but I didn't realise they were all Czech, or were going to bring all their friends down for such a big match. There must have been around 50 Czech fans packed in.

It was interesting to note how different the atmosphere was to how it would have been if England had reached the semi-final. This was a bunch of supporters who seemed to be positive about supporting their team - you could bet your life on the fact that if you were in a pub watching England drawing 0-0 with Greece in the closing moments of a semi-final the abuse being heaped upon our sportsmen would be vitriolic. Well, you only had to look at yesterday's "The Sun" back page line-up of the men "GUILTY" of crimes against English sports fans - Henman, Beckham, Vaughan and Dallaglio - to see how we react. 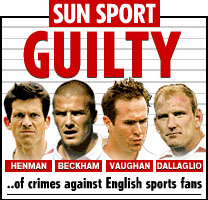 One other difference with the Czech fans was something I've never seen with England fans. At the front of the pub was a guy, face painted in the Czech flag, who spent the majority of the evening winding up the crowd into singing, chanting and shouting. He drank a lot of beer, but he can barely have seen 20 minutes of the match, as most of the time he had his back to the screen. We English seem to want to watch every second so we can criticize more accurately.

The only time I've seen anything similar was at the England-Scotland game at Wembley in Euro96. My father & I were sitting about five seats away from the dividing line between the English and Scottish fans. There was one Scottish fan who appeared to spend most of the match with his back to the pitch, shouting abuse at the English. The language was quite astonishing, and in a role reversal, I blushed on behalf of my father!

It was a shame tonight to see the Czech's go out - (Not least because I had them in my work sweepstake) - I have had a soft spot for the former Czechoslovakia for many years. It all stems from the 1980 European Championship - Euro 80. The first major football tournament I remember was the 1978 World Cup in Argentina. Euro 80 was the first time I saw England play in a major tournament. Now, it turned out to be our traditional fiasco, (don't talk to me about the penalty decision in the Spain game), but before the tournament at the age of 9 I was given some free newspaper/magazine supplement with all the scores to fill in, and profiles of the squads. There was also an article on the history of the tournament, and as a child I was immediatly enchanted by the story of the tiny (then communist-behind-the-iron-curtain) Czechoslovakia beating the mighty West Germany in the 1976 final on penalties. From that point on the names of Antonin Panenka, Zdenek Nehoda and Marian Masny featured prominently in my mini-motty style commentary as I played Subbuteo. 16 years after that I was lucky to see in the flesh a re-match between the Czechs and the Germans at Wembley in the Euro96 final. Like tonight, that didn't have the result I wanted either.

Still, the saddest thing tonight was that I believe that this was the last international match that Pierluigi Collina will referee. The mandatory retirement age for referees in Italy has ended his career. He reached the pinnacle of his vocation, refereeing a World Cup Final, and the opening match of this tournament (oh the irony, the final is a rematch) - but I just wish, especially as Italy were not involved in the knockout stages of the competition, that he could have reffed this European Championship Final as his finale.

My other regret from the Euro2004 tournament? That I suspect I have linked to transient content. The official Euro2000 website is no longer there. Any running-commentary-blogstyle links to it are lost in the digital ether. The BBC Euro2000 site still remains - but for how long? Storage is cheap and bandwidth will be negligible, so why can't UEFA make the tournaments persistent on the web in the way that the Euro 80 booklet or my España 82 Panini sticker books are persistent reminders of football tournaments to me?