A busy time for Guardian Beta

It has been a busy couple of weeks on the Guardian Beta site. Over the last few days we’ve launched or started testing several new products.

The Guardian has moved into another new medium with the launch of a Guardian app for Google TV. Group Product manager Sharath Bulusu had a stand out at SXSW to introduce it to the American market, which the first version is aimed at. Writing about the launch Stephen Folwell suggested that, having learnt from the Beta version, we plan to “lock that design down and replicate it across other platforms, with a clear focus on the major UK platforms.”

If you haven’t got a Google TV enabled set, then there is a picture gallery illustrating how the product looks, and Dan Catt has blogged about some of the behind the scenes process of building it. Dan has been the main developer driving the project, with design work from Ben Wuersching, and the occasional oar stuck in by myself, Karen Loasby and Lynsey Smyth from the UX team. 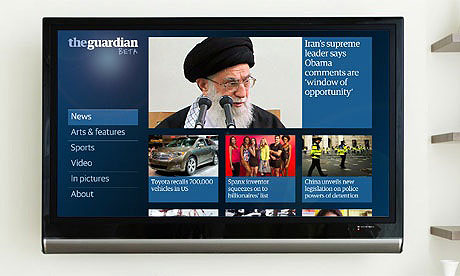 The Guardian app for Google TV

On Android and iOS we’ve released an experimental audio storytelling app. The premise is that you start the app, put it into “autoplay”, and as you walk around the environment surrounding the Guardian’s Kings Place office, the relevant audio is triggered as your phone locates you via GPS. Francesca Panetta has been the editorial mastermind behind it, and she has hyperlocal podcasting history, having worked on an audio series for Hackney. The Londonist interviewed her about that.

You can download Streetstories for iPhone, iPhone with extra stories or Android. It is free, and, if you can’t get to King’s Cross, there is a manual mode so you can listen the stories away from their geographical context.

Coming out of beta has been n0tice.com, an experiment in hyperlocal publishing. It has been developed by the Guardian Media Group in an outpost from our main digital development department, headed up by Matt McAlister. Matt has blogged about how he hopes the platform might help people to notice the things around them whilst being glued to their scenes. He has also written about how they have tried to maintain being a “start-up bubble” stuck on the side of a large media company - a blog post well worth reading in full. Matt first showed me a prototype of n0tice a couple of years ago, and I remember the two of us sitting in a meeting room with me being completely jaw-dropped by the potential it had. I’m delighted it is now out in the wild.

We’ve also got ourselves a Twitter account for @guardianbeta, primarily for “announcements and a way to give feedback on @Guardian experiments, prototypes and half-finished ideas”. And very possibly irate drunken tweeting if I’ve got my Tweetdeck logged in to the wrong account and Leeds contrive to lose 7-3 at home again. Which hasn’t happened. Yet.

And there’s more to come...

If you were at the Guardian Open Weekend, you might have been accosted by people user testing some prototypes produced by my colleague Karen Loasby and myself. There is plenty more to come from Guardian Beta over the next few months...

Read other recent posts about: Mobiles, The Guardian