We don’t really do “headline” slots at London IA, but at January’s meet-up, we’d kind of figured that it would be hard for anybody to top the gun-wielding zombie antics of Mary Hamilton.

“Verbs. Zombies. UX.” was her tale of running Zombie LARP, which, for the uninitiated, involves paying for the privilege of running around a deserted shopping mall trying to survive a zombie attack. Or as they describe it: “You and your friends, armed with NERF guns, trapped in a zombie-infested building. It’s a live-action game of combat, suspense, black comedy, and high-speed occult fear.”

It is all quite a long way removed from “Thorin sits down and starts singing about gold.”

Zombie LARP effectively gives the player very few verbs. In fact, it basically gives them “shoot” as in “shoot the gun at the zombie” and “run”.

One important digital UX parallel to draw here is that a limited set of verbs governs the user having a limited set of actions. When we say to users that they can only “Like” content, then “Like” doesn’t carry any nuance. When people use the “favourite” button to mark something as “read later”, “this is dreadful”, “that’s funny” and “I agree”, then forcing them to use one verb robs the action of semantic meaning.

But the trade off in giving a choice in some digital environments is tricky. I mean, who thinks that hacking Millie Dowler’s phone was “inspiring”, “funny”, “hot” or “crazy”? The UK Huffington Post gives you the chance. 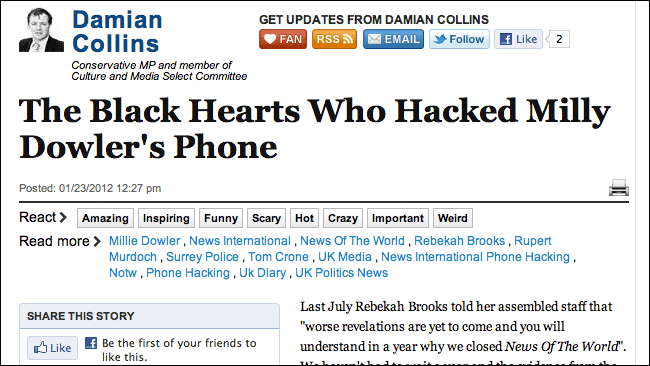 Mary explained how the community has taken the idea and done things that they would never have imagined when setting up the games. They have people turn up dressed as sexy zombie nurses. People argue with zombies that they cannot be harmed because they have absolute faith in science. And they have had one unexpectedly effective invasion of co-ordinated Morris Dancers, whose gentle brand of working as a troupe perplexed the zombies.

Which boils down to people being great - as you’ll have seen if you’ve ever been involved in any online or niche community. It doesn’t take long for in-jokes, shorthand references and improvisation to take hold amongst a bunch of people with similar interests who are trying to have fun. Which leads to...

Another software development parallel was with iteration. Mary explained that they have people oversee the games as referees which allowed them to iterate. They sometimes have to run around and change the rules during the game. Which is, I think, how I feel when I am running around saying “Yes, I know that is what it said on the wireframes, but what I meant was...”

Joking aside, the point was that there is no point carrying on with a set of rules which are proving themselves not to work. Why wait for the whole game to play out, when you can see an improvement or stop a bad situation developing?

One of the most retweeted things we’ve had at London IA for ages was a snapshot of the Zombie LARP “Rule zero”:

As Mary said, it makes you examine whether your behaviour is a bit dick-ish. And gives the players explicit permission to say to someone “Sir, you appear to be being a bit of a dick. Please desist forthwith.”

Or, as she explained it, made it OK for the zombies to relentlessly pursue someone being a bit of a dick in order to remove them from the game.

The next London IA will be Tuesday 7 February 2012. Jonty Sharples will be hosting, as I won’t be able to be there, which is somewhat crushing as it looks set to be a great evening if you have an interest in how agile and UX work together.

Jeff Gothelf will be presenting “Lean UX – Getting Out of the Deliverables Business” which will be followed by a Q&A about anything/everything agile with James O’Brien, Johanna Kollmann, Leisa Reichelt and Mark Plant.