Digital literacy for all - still a long way to go...

As you’d imagine, I’ve been following the Guardian’s digital literacy campaign and the debate around the provision of computer education in schools that went on last week with great interest. I’d particularly recommend reading:

I’m of the generation that grew up with BBC Micros in schools. I first started programming on one when I was about ten in infants school, and my senior school had a networked bunch of them. At home I had a ZX Spectrum. 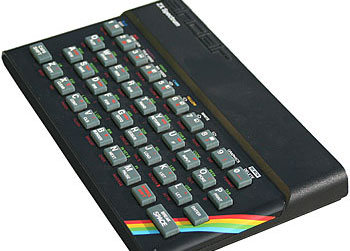 When I was eleven and twelve a few of us used to write games, and put posters up in the school announcing their release and hoping somebody would buy them. I wrote one called “Risky!”, involving rescuing people from the tops of burning buildings in a helicopter. It was written in Sinclair BASIC, and based on a Nintendo Game & Watch, so it had limited scope for movement. The person could be in a small finite number of places, as could the helicopter, hence the game mechanics were pretty easy to calculate.

I remember now that there was quite a logical flaw in it - if you failed to save a person, you lost a life, and a message flashed up saying “You need to buy a new helicopter. You owe me £3,000.” I’m not really sure why failing to save someone meant your helicopter didn’t work anymore, or how I settled on £3,000 as the price of a helicopter, which seems incredibly cheap for the early eighties. But I was eleven or twelve.

Later on I did a City & Guilds certificate in computer programming. The task was to take a numerical input between 1 and 1,000 and have the computer render it in text i.e. you would enter 207 and the machine would render it as “Two hundred and seven”.

Of course, you are just learning, so I rushed headlong into programming without planning, and the approach I took was to render it in the simplest way possible, and then reverse engineer all the exceptions so it didn’t say things like “onety seven”. Not the most efficient bit of software ever written, and I only got a B. I also took Computer Studies as an additional GCSE subject, cramming a two year course into one year. Part of it involved studying and learning the database structure of the DVLA centre.

So, given all that, you can imagine how dismayed I am to hear things along the lines that “kids these days” get taught how to open a file in Excel and how to send an email.

Two points of caution though.

Firstly, programming isn’t everything. There will be plenty of kids for whom sending an email and filling in a web form is all they need to know about computers. And I feel a bit disheartened whenever I see the debate immediately veer into the “Well, they shouldn’t learn Word because it is proprietary software by evil Microsoft. If the human race is to survive at all, we must teach children to write their own word processing software with a GNU General Public License. But only v2 of the license because, frankly, I don’t agree with the changes in version 3, and no sane person would.”

OK, I exaggerate a bit, but we need to beware of language around teaching about technology that makes us all sound a little bit zealot-y. “Learn Latin, live longer!” is a slogan employed by proponents of state schools teaching the classics. I suspect that “Learn computers, in the future every single person on the planet needs to understand how to program!” sounds similarly specious.

Secondly, who is going to teach these kids?

You can get a contract ICT teacher role at “a charming independent boys’ school located in north west London” for £100 to £130 per day, plus the debt of having studied to be a teacher. Or a developer job with a daily average contract rate of £375. Which would you do if programming computers was your love?

Average rates for programming contracting according to contractoruk.com

Read other recent posts about: Children and Teenagers, Digital media, Politics, The Guardian