At last week’s Hacks/Hackers London meet-up Dan McQuillan was talking about “Hackovation: how social innovation camps, crisis camps and other hacker movements are trying to go beyond the headlines”

It was an interesting mix of practical examples of hackers getting together to make stuff happen, and philosophical musing on the extent to which the “hacking” mentality was pervading culture and political activism on a global scale.

On the practical side, Dan talked about Social Innovation Camps. These are like hack days, but rather than a vague theme, or a “do what thou wilt” attitude, they have defined goals. Before the camp there is a call for ideas. Dan said they usually get over 200, and these are then whittled down to something like six. People are invited to the events, rather than it just being a scramble for tickets, and this means that they can ensure there is a balance of skills at the event, including philosophers and marketing people as well as the requisite coders.

Dan said they generally work as a peer-to-peer way to developing ideas. It helps for the software engineers because they aren’t in the dull situation of being handed a massive functional spec and being told “build that”, but they are also in a social situation where they have to explain and talk about their ideas and the way they are building something.

The concept has been successfully exported to places like Bratislava and Kyrgyzstan, which Dan described as fascinating because the people there were trying to solve many of the same problems that camps in the UK had addressed, but were having to put in a lot more of the infrastructure and data work themselves because of their state IT provision being less developed.

Dan thinks that the reason it works is because it uses one of the fundamental principles of "teh internets" - i.e. you aggregate capabilities from a variety of sources and networks, and end up with something that is greater than the sum of its parts. Rapid prototyping and lean start-up style approaches seem to get projects up and running much faster than the long-running projects of NGOs ever seem to manage. He talked about people turning up to the tech crisis camps set up to help Haiti because they “wanted to do something to help”, and tech has now enabled that, when previously you would have been powerless to do anything useful. You do, of course, need to beware of mistaking clicktivism for activism.

The ideas that have worked best from Social Innovation Camps, Dan said, were born of frustration - for example working out how to improve the design of shoddily manufactured and conceived “living aids”, or delivering ways to capture feedback about the NHS from patients, or about the police.

Dan McQuillan went on to then extrapolate some of the ideas from hack culture into the modern political scene. He suggested, for example, that the Occupy movement were performing a kind of “prototyping”, by living out the lifestyle they would like to see adopted. He also showed a picture of Tahrir Square, and suggested that the self-organising nature of the group, who have set up areas of functionality needed by common interest, could be compared to open source culture. 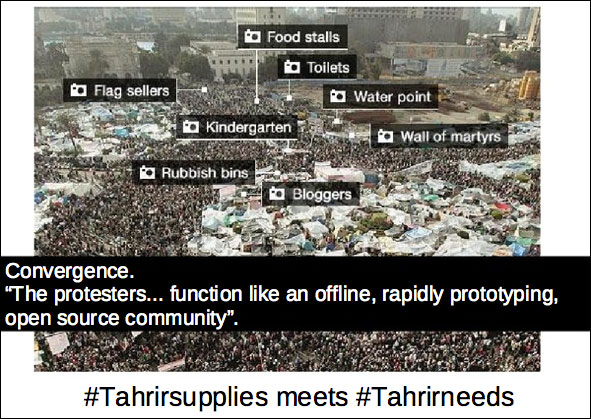 I have to say that I was unconvinced by this argument. In 1936 the Jarrow Marchers relied on spontaneous locally-organised support for beds wherever the spent the night, and much, much further back in 1381 it was obvious that marching into the centre of London was a way of drawing attention to perceived wrongs. Neither of these sets of protestors needed the example of the Linux kernel or BitTorrent to self-organise. In fact, I’d argue that the influence is the other way, and that the open source movement, the distributed command/control structure of 4chan et al, and our current expressions of digital dissent are mimics of analogue models that have been around for centuries. Technology certainly acts as a enabler - look at the role of Facebook and SMS in inspiring gatherings in Egypt - but I’m not sure it is a determinant.

This set of slides shows some of the things that Dan talked about...

Next I’ll have my notes from Stephen Grey’s fantastic Hacks/Hackers talk about how he exposed the CIA’s dirty rendition flights programme using datajournalism and software. I’ll also shortly be publishing an ebook that gathers together all of my blog notes from London’s Hacks/Hackers meetings since I started attending in September 2010.