In support of "Save our libraries"

I featured as one of the people being quoted in this BBC News Online Magazine article about the relationship between libraries and the internet last week - "Are libraries finished?". I'm quoted in my usual role as a starry-eyed technophile, which doesn't really very accurately reflect my position on libraries and library science, as anyone who follows this blog or my work with information professionals at FUMSI will know.

I didn't get to an official "save our libraries" event at the weekend, but you can get a flavour of the day from the live blog coverage on the Guardian's books site. I did take the time though to go and visit the library that enthused me with reading when I was a kid. I have fond memories of running along the corridor at Walthamstow Central library to the bookcase at the back of the children's library that housed the Doctor Who Target novelisations. In a pre-DVD era, that was the only way I could experience the early stories about Daleks and Cybermen and Yeti and the Master.

The children's library at Central is now a big bright open area, rather than the tiny room I remember, and whilst I was there on Saturday it was nursery rhyme and story time for kids. There were about 15 families enjoying a half-hour of free live interactive educational entertainment based around books, instead of being stuck in front of cartoons on the telly on a Saturday morning. I can't imagine why you wouldn't think that was a valuable resource worth keeping.

Arsonists tried to burn down our library in 1982, when the Victorian era building was almost entirely gutted. The community rebuilt it. It would be a dreadful shame if the coalition cuts managed to finish the arsonist's job for them. 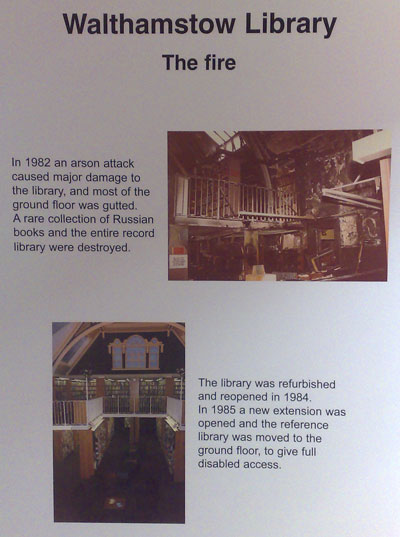 Read other recent posts about: Doctor Who, Walthamstow