On Friday I had a lovely relaxed analogue #jeecamp where I spent the majority of the day making notes on paper and talking to people, instead of having my nose in my laptop.

As I mentioned yesterday, I still managed to send a 90 second video back down to London on the Guardian's intranet so that it was available to play during the commercial Open Platform launch developer challenge demos, and I also published a currybetdotnet post about HTML5 and IA.

But, considering I was at an (un)conference on a subject I'm passionate about, that was a pretty light day for me.

When I got on the train back to London, I tweeted a crowdsourcing question: Should I write a blogpost about #jeecamp, or simply put my iPod on and doodle. Twitter was unanimous - doodle.

However, @helenduffet said, "In keeping with the chilled out analogue-ness, doodle a nice infographic. Then scan it in and hey presto - that's your blog post!" 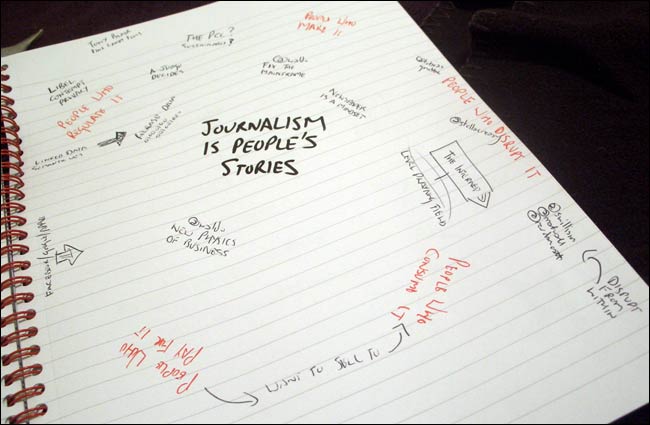 After the day's discussions, I basically identified 5 groups of people that I thought were important: The people who make, regulate, pay for, consume and disrupt journalism. And made the centre something I think we overlook, especially when we start obsessing about technology or using phrases like 'data journalism': "journalism is people's stories"

And the bullet points of what I sketched...