Africa in the FIFA World Cup: Part 2 - The wilderness years

On Friday, the draw will be held for the first World Cup Finals to be held on African soil. To celebrate, I've been looking at the history of African teams taking part in the world's biggest sporting tournament. Yesterday I started with a look at the 1930s, when Egypt became the first African team to take part in a World Cup Finals in Italy in 1934. When the tournament resumed after the interruption of the Second World War, it was to be many years before an African side appeared again. Today I want to look at what happened during Africa's World Cup Wilderness years. 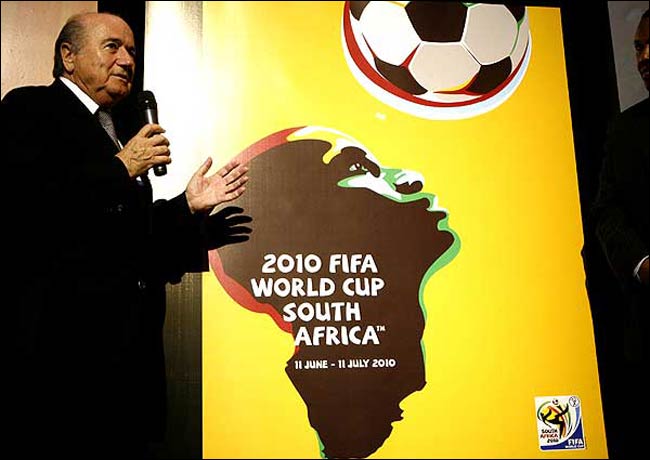 Africa in the FIFA World Cup: The wilderness years

The World Cup resumed with a tournament staged in Brazil in 1950. No African teams took part in qualification for these finals, but Egypt attempted to reach the 1954 tournament held in Switzerland. They took part as the only African team in the European qualification section. They lost home (2-1) and away (5-1) to Italy in Cairo and Milan, in matches staged in November 1953 and January 1954.

Part of the problem with getting African teams to the finals may have been that there was nobody lobbying effectively for their inclusion. The African confederation, CAF, did not form until 1957, with Egypt, Ethiopia, South Africa and Sudan being the founding nations. That year also saw the first Africa Cup Of Nations tournament, where racial politics saw South Africa unable to take part.

There were many remarkable things about the 1958 World Cup in Sweden. It was the only time that all 4 British Home Nations have qualified for the finals, making up 4 of the 16 teams competing for the trophy. The tournament saw the emergence of a young Pele, and Brazil's victory made them the first, and so far only, team to win the World Cup outside of their own continent.

What it didn't feature was any African teams.

FIFA's intention had been that one spot was reserved for the winners of a joint Asian/African qualifying campaign. However the tournament soon degenerated into a politically motivated farce. First Turkey, then Indonesia, then Sudan refused to play Israel, leaving them as the qualifiers. FIFA had decreed that no team could qualify without actually playing a match, and so, through no fault of their own, Israel found themselves in a play-off with a UEFA runner-up. Belgium also refused to play them, and so in the end a two-legged match with Wales saw the Welsh reach the finals 4-0 on aggregate.

Chile hosted the 1962 tournament, and again there was no African representation. Ghana, Morocco, Nigeria and Tunisia attempted to qualify. Morocco played Tunisia 3 times before a toss of the coin saw Morocco reach the second round, whilst Ghana beat Nigeria over two legs. Morocco then earned a play-off spot against a European team with a 1-0 aggregate victory over Ghana. Spain defeated them comprehensively to reach Chile. Meanwhile, another African side, Ethiopia, took part in the UEFA qualification section, being defeated in a two-legged encounter with Israel.

When The Guardian featured a guide to the teams making up the 1966 Finals in England, the fact that Africa was not represented did not warrant a mention. The most 'exotic' team on display were the unknown quantity of North Korea, but their famous heroics at Ayresome Park against Italy would have been unlikely to take place had the Asia / Africa qualifying competition not imploded. 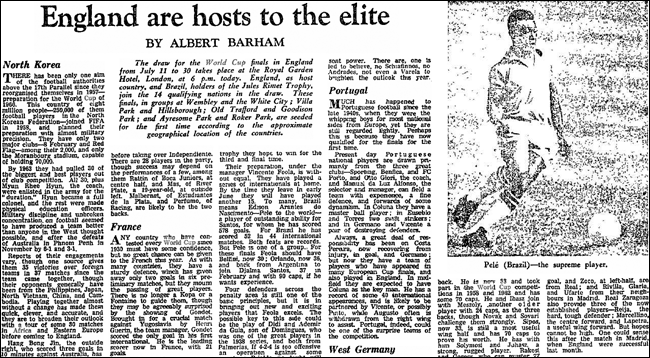 The race to qualify for the 1966 World Cup would have been the most keenly contested amongst African nations to date. Algeria, Cameroon, Egypt, Ethiopia, Gabon, Ghana, Guinea, Liberia, Libya, Mali, Morocco, Nigeria, Senegal, Sudan and Tunisia all initially indicated that they would take part. However, when FIFA decided that the winner of the African zone contest would face a play-off before taking their place in England, the African teams withdrew en masse, and not a single game was played. Albert Barham had reported the issue in The Guardian in July 1965, describing the withdrawal as the only 'sour note' in preparations that were otherwise going well. Barham also reported that FIFA fined 9 African nations 5,000 Swiss Francs each for their boycott. 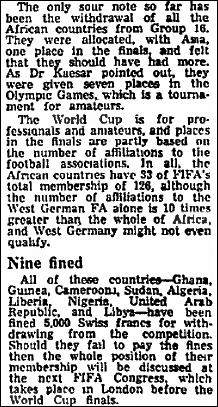 There were some Africans in England in 1966 though. In a Guardian article "Crowds will be firmly controlled" from October 1965, David Lacey wrote that South Africans made-up the fifth largest group of external fans with tickets allocated for the final - 553 were planning to make the trip.

Moves were made soon after the World Cup to remedy the situation. In November of 1966 Sir Stanley Rous was making plans for an expanded World Cup tournament that would see more African involvement. He said:

"Football in Africa is increasing in leaps and bounds...They are beginning to get grass pitches where the lack of them has been a handicap. Africans are beginning to take over from Europeans, and as they learn something of administration we shall hear much more from them" 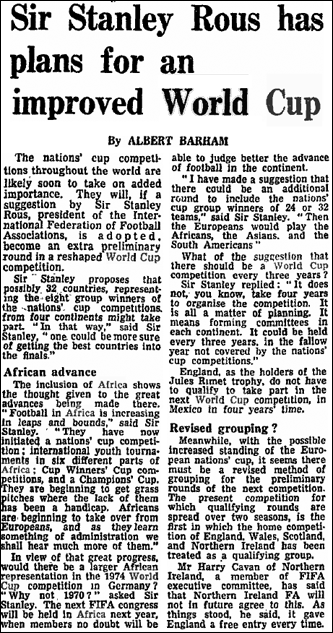 The world did hear more from Africa in 1970, and in the next part of this series I'll be looking at the return of an African nation to the World Cup stage for the first time since Egypt's solitary game in 1934.