This is the final video clip of a series I've been publishing over the last couple of weeks. They were made at the London IA mini evening where we held a redux of the UX London conference organised by Clearleft. This bit of video is the conclusion of Tom Coombs providing a redux of Jared Spool's sessions 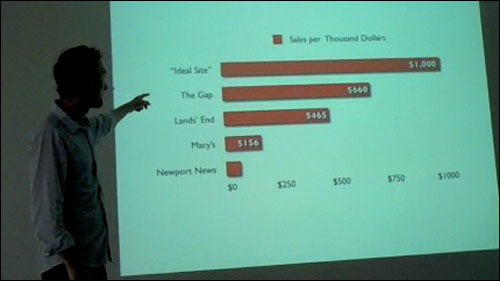 The last section of Tom's talk looks at three things that Jared talked about at UX London. The first is how any usage of the back button almost exponentially decreases success rates. Secondly Tom explains a study carried out by Jared's company which showed just how poor most ecommerce sites are at converting even a committed and willing customer, and finally there is a look at a very unconventional approach to homepage design.

The next London IA event is another edition of 'London IA in the pub'. We'll be upstairs at The Island Queen in Islington on October 14th, and we plan to have a series of "quick'n'dirty" talks from people including Stuart Cruickshank, Leisa Reichelt, Boon Chew, Joe Lanman, Francis Storr and myself.