Let there be humbug!

Yesterday in the Mail On Sunday was an article entitled "The Genesis enigma: How DID the Bible describe the evolution of life 3,000 years before Darwin?". 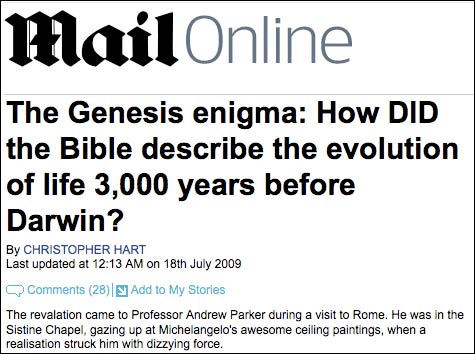 The premise of the article was an outline of Professor Andrew Parker's theory that the Book of Genesis features an accurate description of how scientific evidence has chronologically ordered evolution.

It includes perhaps one the most entertaining couple of paragraphs I've seen in a British newspaper in recent months.

"On the third day, we are told: 'God said, "Let the earth bring forth grass, the herb yielding seed, and the fruit tree yielding fruit after his kind, whose seed is in itself, upon the earth: and it was so."'

But wait a minute, says Parker. If you take 'grass, herb and tree' to mean photosynthesising life in general, then this is, once again, spot on."

Which I interpret to mean "If you take something saying one thing, then interpret it to say something different which supports the conclusion you were hoping to find, you'll find yourself with an uncritical puff piece in the Sunday papers, and the book is available at the end of the month thank you very much. Spot on!"