During July and August I recorded over 3,500 URLs from mainstream media sites becoming popular on 8 social bookmarking services.

Using the results I've so far published an e-book covering UK newspaper success with social media, and blogged about local newspaper and freesheet success, as well as writing a whole series on 24 hour news stations like CNN, the BBC, Sky News and Al Jazeera.

Another group of sites I looked at was the UK's terrestrial broadcasters. I expected to see content from BBC News in the list of URLs, but I also wanted to see if any content from ITV, Channel 4 or Five featured as popular on social bookmarking and sharing sites. The answer was pretty much no.

Over the course of the month I didn't see any web content at all from ITV or Five feature on any of the 8 link-sharing services I looked at - Delicious, Digg, Fark, Mixx, Newsvine, Reddit, StumbleUpon and Yahoo! Buzz.

The only URL I spotted from the terrestrial broadcasters other then the BBC was from Channel 4. A microsite supporting some religious programming about the Qur'an appeared as a top seed on the Newsvine site. 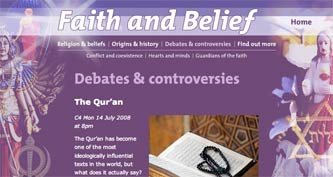 Newsvine works by allowing people to share a link as the starting point for a blog post or discussion thread. Amongst others the Channel 4 webpage 'seeded' these discussion, both for and against the programme. 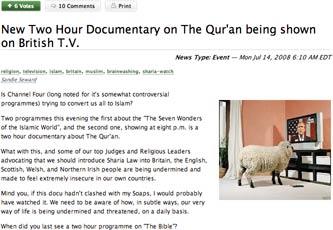 This view suggests that the BBC is much more successful at social media than any other terrestrial UK television station. However, the BBC is also the only broadcaster to also effectively run an online 'newspaper', and tomorrow I'll be looking at whether anything aside from the BBC's news content was popular on social media sites during my study.