Euro 2008 is now down to just 8 teams, but over the last two weeks of matches I've been surveying the websites of the original 16 finalists. There weren't any major surprises there. It seems that the larger and more prosperous nations had the best websites - and the big three of Germany, France and Italy seemed to be dominating in the online world in the way they have so often done in the past on the football field.

The FIGC site from Italy was the only place I spotted anyone offering a 'widget' for download. This was an RSS powered desktop application for Windows based PCs. It was a shame that the content was not also available to Mac users or other RSS software applications, as there was no way to independently subscribe to the feed powering the widget.

Some of the 'smaller' nations in terms of either population or football heritage were providing a great deal of in-depth online coverage of the tournament. The FA sites in Portugal and Turkey had a lot of content specifically developed for Euro 2008, and were writing news stories not just about their own teams, but about the fortunes of others. 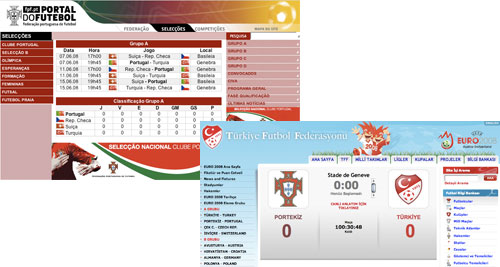 There was an interesting contrast between the two sites of the co-hosting nations. The Swiss FA seemed to be barely acknowledging the existence of the tournament on their site. The Austrians, however, had invested heavily in a Euro2008 site with information about not just the tournament organisation itself, but with news about all of the competing nations. 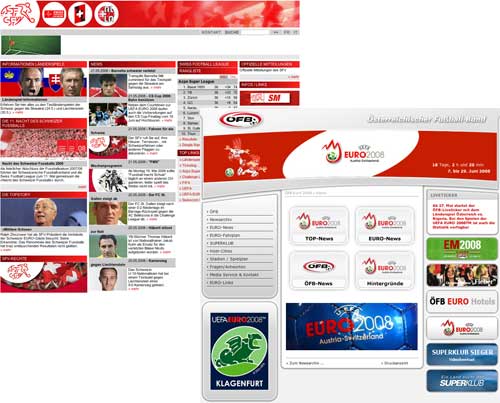 Video and television rights can be notoriously complicated for sports events, but nevertheless quite a few of the FA websites were beginning to experiment with video clips. Before Euro2008 kicked off these included qualification match highlights and interviews with key members of national squads. The Austrian, Czech, French, German, Dutch and Swedish sites all featured video.

The Dutch site limited video viewers to those within the geo-IP borders of the Netherlands. Given the way they romped through the opening stages of the tournament against France and Italy, perhaps that was to spare everybody else in Europe's blushes.

For delivering web pages that were unhelpfully long, the Romanian FA took the prize with their epic homepage (subsequently fixed it seems), although the 6000+ pixel long Russian site map also made them contenders. The Greek FA meanwhile, as well as running the only team to lose all three of their matches at the tournament, also had probably the most obscure content, in the form of a picture profile page for each of the referees. 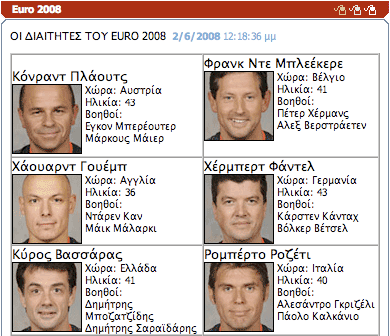 Finally, there may not have been an English team present at Euro2008, but it was interesting to note that of the 16 sites, 10 of them offered at least some of their content in an English language version.