It is twenty-five years today since 80s style icon the Swatch entered the market.

As a tweenager in the early eighties, naturally I had a Swatch. However, as a fledgling moody indie kid I had the least colourful design available - mostly grey with a hint of black. They didn't do a 'goth' edition at the time, so it looked a bit like an earlier version of this model.

The trick that Swatch successfully pulled off was to sell a pretty boring artifact to kids - a watch - and convince them that they needed to buy a new one on a regular basis on account of the design, not on the grounds of whether it could still tell the time properly or not.

There still seems to be a very active community that collects the watches, and some of the rarer designs fetch a healthy price at auction. There is a club for collectors who get sent a unique limited edition by the company each year. It is a nice way for Swatch to re-pay customer loyalty to what must be their biggest brand advocates.

Having a dig around the web looking for information on my old Swatch I came across this oddity though, which I dimly recall - the brand's ill-fated move into making telephones. 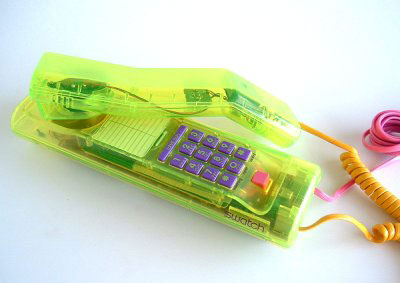 Actually, the more I thought about this, the more it seemed like an idea ahead of its time. Producing lots of limited edition brightly coloured and over-designed telephone handsets that people will upgrade every year or so, doesn't seem like such a bad idea these days.

Having a brightly coloured, over-designed, fixed-line telephone that you only replaced when it broke, and which people rarely saw, however, doesn't seem like such a sound business plan!

I see the Wikipedia entry for Swatch classifies them as an "80's fad", but, on the web and in their sports sponsorship programme, the craze still seems to be going strong 25 years later.