The Daily Express is back on the McCann case

When you are young and you fall off your bike, you are often told that the best thing to do is to get straight back on it again. And it must have been that kind of week for the Daily Express, as they took their first baby-steps backs into reporting the Madeleine McCann case in the post-front page apology era. 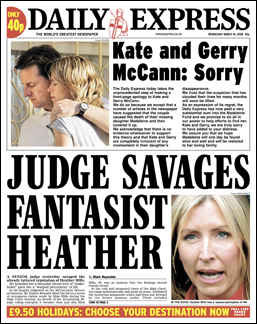 Their first story online since the apology concerned Robert Murat, someone else whose life has been changed irrevocably by British media coverage of the McCann case, regardless of whether he had any involvement in the events of the night when Madeleine went missing. 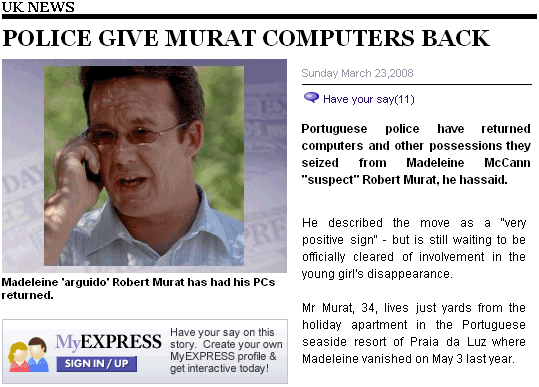 I was interested to see that the Daily Express had opened up the story to user comments online. At the time of writing it had only generated 11 comments since being published on Sunday. That suggests a much tighter moderation regime on the topic. And not everybody commenting agrees with the decision to allow user comments:

ERROR OF JUDGEMENT DE PLEASE REMOVE THE HYS FROM THIS ARTICLE - 25.03.08, 11:38am
In view of the comments on former Madeleine McCann articles' I feel it is an error of judgement to invite HYS comments to this article.
Posted by: jojam

The Daily Express and sister newspapers - and the Daily Mail - did not suddenly decide to say "Sorry." There is misinformation on that. Many have the impression that the newspapers suddenly got an attack of remorse. Not so.

But in Mr. Murat's case, he did not sue them although he had as good a case against the newspapers as the McCanns apparently had. I hope that he does not decide to sue. He has always taken the higher ground and refused to comment. No one can deny that.

Therefore, in view of Mr. Murat's stance, his refusal to lambast the press as have the McCanns and Clarence Mitchell, I think it would be a good relfection on the press to VOLUNTARILY APOLOGISE TO MR. MURAT FOR THE LIBELLOUS COMMENTS PRINTED ABOUT HIM.

If the newspapers fail to apologise to Mr. Murat for the libellous comments about him, then their apologies to the McCanns are empty words, made under duress - of libel and its high penalty.

The Daily Express report, although it mentions the apology made to the McCanns, shields the guilty newspapers under a cloak of anonymity. This is, of course, more than they have done for Mr. Murat.

"Mr Murat said he was 'considering his options' for taking legal action over allegedly libellous articles printed about him in the wake of the apologies to Madeleine's parents, Kate and Gerry McCann, published by four national newspapers this week."

The Express may have taken a softer tone on the McCann family in its reporting - but some things haven't changed. The most popular searches on the site are, apparently, exactly the same as they were before the Express expunged all of its Madeleine McCann reporting from the online archive: