I love stories about the history of online computing, not least because of the seeming serendipity of it all. In 1978 a man gets trapped in a blizzard in Chicago, and thirty years later, I'm happily earning a living as a consultant helping people with the internet from a Greek island.

Well, if you've ever wanted someone to blame for the incessant fanboy flame-wars on Digg, the necessity of Godwin's Law, and for the reason that the mainstream media keeps terrifying parents that an army of online perverts are stalking their children, then look no further than Ward Christensen. 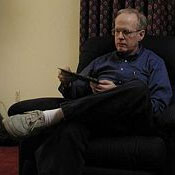 Thirty years ago, following a spell stuck inside during a 1978 blizzard, he, along with Randy Suess, launched a 'Computerized Bulletin Board System' in Chicago. It allowed users to dial-in with their computers to an online 'social space'.

The idea was quite simple. His local computer club had an old-fashioned bulleten board, where people could put up cards requesting lifts, or offering software, or suggesting clubbing together to buy hardware. Christensen figured he could make a computerised version of it.

Actually, February 16th appears to be a slightly arbitrary date for the finish of the project, but it has become the accepted one. Ward's system grew popular, and the BBS phenomena began. According to this message exchange preserved on bbsdocumentary.com, in the early 1990s, this is how Ward remembered starting the whole thing up, and how he saw the future of online networked computing

Why create CBBS? Well, there's a long story, but the short one was

(1) that I had an extra computer (I'd been doing some talks and bought one to take with me);

(2) Hayes had come up with the computer-controllable internal modem;

(3) I had a phone line - for club recordings about next meeting, etc;

(4) there was this terrible snow storm on Jan 16, 1978, that kept me from going to work, so Randy and I got together by phone and dreamed up the idea.

I thought of it being for the club, Randy said that just we two should do it - "committee" projects just don't go anywhere. So we just did it. I patterned the software after the "cork board and push-pins type of bulletin board", and coined the term "BBS" for it.

The future of BBSs? more specialized, more commercial, more lines, but also a lot of people just getting into it for the fun of it. Multi-media, graphics (talked to a guy with A HUNDRED SEVENTY THOUSAND graphic images online, today - over TWENTY GIGS of disk...).

Roll of BBSs in mass media? Well, there will be limited exposure - things like library BBSs or perhaps a city's or village's council BBS or something - but still not something of general appeal - just not a high enough percentage of people with modems yet. 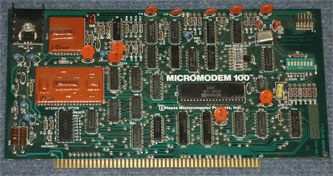 Naturally, Christensen assumed legendary status within the industry and amongst BBS enthusiasts at conferences.

During a meeting of BBS industry folk in 1993 named the 2nd Annual ONE BBSCON, the host had everyone in the room stand up. Then he asked those who did not run a BBS to sit. Then those who didn't have a Board in 1992. Then 1991, 1990, and so forth year by year. With each year, fewer were standing. When he reached 1978 only one person was still on his feet. As he stood there alone the host said, 'Folks, meet Ward Christensen'.

Computer Bulletin Board Systems were the first places where enthusiasts began to swap software, documentation and inevitably ASCII pr0n online. Yet more evidence that the music industry should get in the queue before it starts getting compensation for the changes made to their business model - effective digital compression of music to files small enough to be easily swapped over the bandwidth available was still some way off.

For those of you who never used a modem before the advent of graphical World Wide Web browsing, textfiles.com has some resources reminding us what those days were like.

Reassuringly, despite the online BBS world being populated by a small minority of people with access to computers and a modem, all human life is there. Although the material preserved has is a slight tendency to lean towards piracy, UFOlogy, the occult and role-playing games. As the 'sysop' on textfiles.com puts it about the number of preserved files about conspiracy theories:

"Another fine example of how alternate viewpoints found a willing soapbox in BBSes, Conspiracy Files promised to reveal the true and actual way of the world by exposing the secret, behind-the-scenes machinations of those who were secretly in power. Since everything got equal footing in the file sections or in the message bases, it all seemed a little more plausible when a literate, seemingly well-thought-out essay told you that things were not how they seemed. This is the power that the Internet shares today.

Whether you look at them as the Real Truth shining through, or some amazingly entertaining fiction, you can often spot a good solid conspiracy theory a mile away. You get evidence that has been suppressed, studies that have been done and forgotten, and sometimes, if you're lucky, it'll mention the Pope."

And, of course, there is still plenty of free software online for the BBS enthusiast to re-enact the days when ASCII art and 1200 baud modems were the cutting edge. Finally, I've found something that makes my dial-up connection in Greece seem blisteringly fast.