I make Doctor Who news at last

Technically, it wasn't even an ambition I was consciously aware of having, but after the weekend it appears that I can now die happy. I was just casually perusing my Doctor Who news RSS feeds, when, sandwiched between news that David Tennant had won a Glenfiddich Spirit of Scotland award, and that Andrew Cartmel was going to a convention in the USA, was my name.

Thanks to my article on the BBC's Internet Blog about 10 years of Doctor Who on the BBC website, I've finally merited a named mention in the DoctorWhoNews.com news feed - the #1 fan site for the show on the web.

The post has also been picked up by a German sci-fi blog. When I lived in Salzburg my command of the language only stretched to ordering beer and a weekly travelcard to be honest, but the AltaVista Babelfish suggests the blogger is overly wound-up about continuity issues with the "Death Comes To Time" webcast. 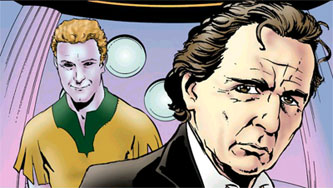 On the other hand, they have put my name on a page headed up by Gort from 'The Day The Earth Stood Still', so it can't be all bad.

Read other recent posts about: BBC, Blogging, Doctor Who