Whilst most of the focus in the musical digital download world last week was on whether iTunes sales had risen by 84% or dipped by 65%, Sony quietly slipped out an incremental update to the European Connect music store. It is the first public release by Sony based on some of my wireframe work. 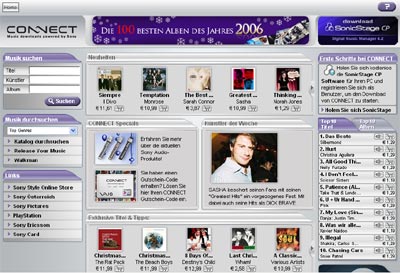 Most of the updated features go on behind the scenes and - hopefully - won't be noticed by the users. The most prominent new feature though is the ability for the content managers in each country to pull together promotional pages based around collections of items, rather than being restricted to collections based on artist or genre. The first of these are just in time for the Xmas, and post-Xmas hardware driven, sales rush. 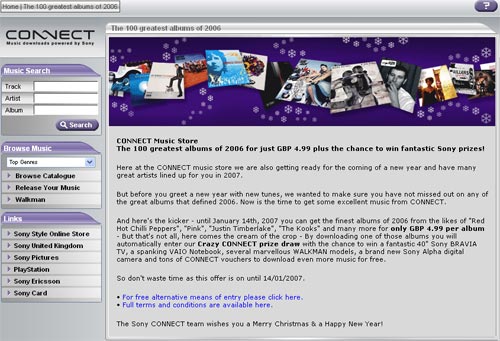 So if you have some portable digital Sony Walkman hardware, or get some for Christmas, then until the middle of January using the SonicStage software, you can download the best 100 albums of the last year in each territory at a discounted price - for example down to 4.99 GBP for an album in the UK, or €7.99 here in Austria.

Well, it says the best 100 albums of the last year, but clearly there weren't 100 albums good enough to fill up the chart, as the offer also includes some classic offerings from the likes of Hendrix, Marley, Madonna and Radiohead. 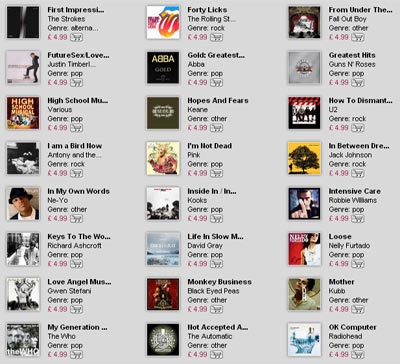 Making a purchase enters you into a free draw too, with the chance to win a Bravia TV, a Vaio laptop, digital Walkmans, a digital camera, or vouchers for free downloads from the European Connect store. You can also enter the draw without making a purchase - although I don't recall the big "TEST GB" headline being in the original specifications ;-) 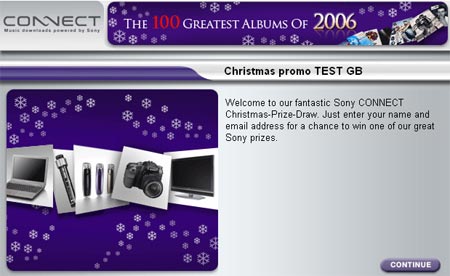 Oh, and as far as the iTunes sales figures go, since it was Orlowski in The Register making a big noise about the 65% revenue fall, I'm more inclined to believe the 84% rise figure.