I was travelling home tonight exactly a week after the murder that took place at Wood Street station on September 5th. There has been quite a palpable sense of shock and anger in the community. Still nobody was feeling worried or uneasy tonight at Walthamstow Central, as it was full of police officers seeking anyone who may have witnessed the attack which took place just one stop further down the line. There was something ironic about the fact that they were having to stop and question people on the platform, because Walthamstow Central, like Wood Street, is of course unmanned at night - and we can't even be sure that the CCTV works. 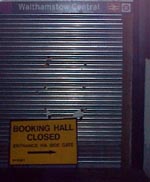