Studio TC1 at Television Centre has been taken over by BBC News for two days to celebrate 50 years of television news broadcasts. There is a small exhibition with information panels and artifacts from BBC News history, including the script written by John Simpson in his notebook just after he had been hit by friendly fire in Iraq.

Each day there are a number of panel sessions being held, and this morning I was fortunate enough to attend the first session, where Natasha Kaplinsky (flushed with success from Strictly Come Dancing) introduced a Q&A session with Richard Baker and Charles Wheeler.

The session started with a show reel of major news stories from the first 15 years of BBC News - including Richard Baker's opening pronouncement: "Here is an illustrated summary of the news".

The show reel had some great clips:

The show reel finished with a clip of Richard Baker (to his horror) and the late Robert Dougall doing a musical skit farewell to the BBC News operation in Alexandra Palace as it moved to its present base in Television Centre at the end of the sixties.

Natasha started the Q&A by asking Richard Baker if he remembered the first bulletin. Of course he did, and explained how the BBC had first employed the same team who read the news on radio on television, and that there was some resistance to putting news on the television at all. The early bulletins compared badly to the glossier newsreels shown at the cinema or once a week on television, as they didn't feature dubbed sound effects or music. In fact the newsreaders weren't even seen on-screen for the first two years. The BBC was worried that firstly they would make inappropriate expressions or fail to show impartiality, and secondly they worried that personality would detract from the stories.

Charles' view of the early years was that as a correspondent it was next to impossible to get a camera crew to actually make reports. He had been stationed in India in the early days of television news, and used to get one quality telephone feed back to the UK once a week, and maybe a camera crew once a month, regardless of what the news agenda at the time was.

Natasha picked up on one of the clips of the Aberfan disaster, and asked Richard how difficult it had been to present this kind of story. Richard thought, watching it again, that he came over as rather callous - it was a difficult tone to get right. He remembered that particular broadcast as during the course of the bulletin the news about the accident just got worse and worse as slips of paper were handed to him.

Asked if there was one story that had really moved them over the years, Charles felt it was actually a later story, that of the end of the first Gulf War in the early 1990's, that had moved him most. He had witnessed a terrible situation where liberated Kuwaiti's were beating up Palestinians in the street, and meanwhile on the other side of Iraq, where Jeremy Bowen was stationed, Kurdish refugees were gathering in the rain-swept mountains. He posited that maybe the more recent things wipe the memory and seem more pertinent.

Asked about the issue of impartiality, Charles observed that BBC journalists worship objectivity and impartiality, but that were times when you "just had to stick your neck out". He felt that, particularly with foreign correspondence, the journalist is building up a body of knowledge about a story or a situation that they can't completely convey to the viewer in a two minute piece to camera. He also repeated a lesson that had been taught to him by former Director-General Hugh Carleton Greene, which he hoped would be inscribed in stone in the BBC's new college of journalism - "Sail as close to the wind as you can. But get it right". For his part, Richard Baker added "You can't be impartial about atrocities".

There was some discussion of the rows the BBC has had with governments at times of conflict - starting with Suez. At that time the World Service in Bush House had a programme that gave a daily review of the British press. During the Suez crisis they carried reports of what was being written in the anti-war Guardian and Observer newspapers. This upset the Government considerably, who felt the BBC was broadcasting anti-Government propaganda. Their solution was to send someone from the Foreign Office to sit in on editorial meetings. The BBC solution to that was to subsequently hold the real meetings in the canteen.

On Hutton, Charles said he thought everyone accepted, including probably Lord Hutton himself, that the report was hopelessly biased. This raised a wry laugh, as you'd expect from a mostly BBC audience.

Natasha asked what it was like working in the old Alexandra Palace, and Richard Baker recalled a couple of highly dubious tales about how much fun it was - and that there was a rather wonderful bar across the road called "The Dive" that was very well used. Charles said there was quite a culture of drinking at the time - he was sure it had all changed now...

There was a discussion about how they felt about news production now, and whether there was too much news. Charles thought so, and felt the quality of news suffered. Natasha asked if he meant in terms of accuracy, but he explained he meant in terms of originality. He felt correspondents were under so much pressure with deadlines for increased news output they didn't have time to find and develop their own stories.

When the questions were opened the floor I got the chance to ask one, wondering how they felt the growth of new technologies like the internet had affected news output, and whether the ability of the audience to access information with different viewpoints from all over the world had changed the role of the correspondent.

Charles felt it had very much been to the detriment of newsgathering. When he had started people would gather around large meeting tables discussing event and stories. Now when he went into Television Centre he saw an army of workers, all sitting at their own terminals, glued to their computers, without so much room on their desks for a single book. He felt that to write a really good script you needed space, and a chance to get some fresh air.

He asked Jeremy Bowen (who was in the front row) to comment, and Jeremy felt that computers for him just generated more work. He said he felt privileged because as an established reporter he seemed to always be allocated the best camera crews, and given the space to put together good reports - he'd just been in the Middle East for a week to do two pieces. He felt though that more junior reporters didn't get the same luxury and were forced into a process that kept them churning out report after report.

Charles also pointed out another area where technology had hindered rather than helped. When he first went to work in the bureaux in Washington it consisted of two people, and they could handle all the work. If a story needed covering, because they used film not videotape, they had to get their own pictures. Nowadays, pictures can be sourced and re-purposed, and a story can be covered without leaving the confines of the studio. However, with so much material and so much more news output, the bureaux in Washington is staffed by 20 to 30 people, yet they probably have less chance to go out and find their own stories or get to meet the people in Washington than Charles used to.

The last word should go to Richard Baker though, since he had the first words fifty years ago. He told the story of a news producer who was suffering undue influence from the War Ministry on one particular day. After a whole series of agitated phone calls during the course of the day the phone rang again a mere minute-and-a-half before the contentious broadcast was due on air. The producer answered the phone: "Hello, who is it? The War Office?...Fuck Off". 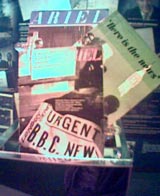 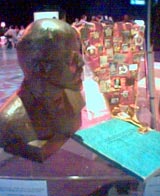 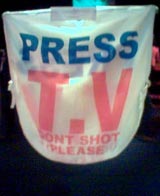 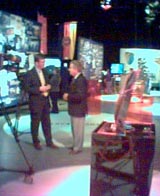 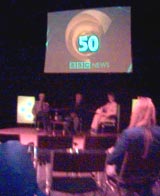